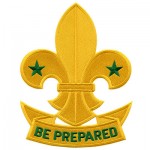 Robert Stephenson Smyth Baden-Powell was born on 22 February, 1857 at Paddington in London. He enjoyed a long military career. After his return to London from South Africa after the Second Boer War in 1903 he rewrote his military training manual Aids to Scouting. Scouting for Boys has sold more than 100 million copies.

Famously, the Scout Motto is Be Prepared. Of this, Baden-Powell explained the meaning of the phrase, in part to mean:

Be Prepared: by having disciplined yourself…..by having thought out beforehand any situation that might occur, so you know the right thing to do at the right moment, and are willing to do it.

The last 36 months have been characterised by continued change across all sectors. Disruption in world financial markets, economic and political instability, geo-political, demographic, technological and environmental reminds us that change is the norm.

With the exception of Australia that is buttressed by a strong mining sector we’ve seen much talk as to whether the developed world is in recession or even a depression. Events in Europe and North America leave little doubt.

There is evidence of this all around.

One Response to "Be Prepared!"