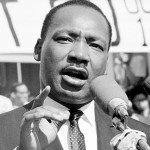 This Wednesday 28th August, 2013 marks the 50th anniversary of the delivery of Dr Martin Luther King’s ‘I Have a Dream’ speech which has been voted one of the most memorable speeches in history.

As we commemorate what is almost certainly the greatest speech of the 20th Century – it is a question worth asking: What makes a great speech and where have all the great speeches gone?

It is timely question, especially as we are in the midst of an election campaign with politicians from all sides calling upon us to ‘lend them our ears’ – to consider what makes an inspiring speech and what are regarded as the most memorable speeches given in Australia.

Author Don Watson was a former speechwriter for Paul Keating. He believes there are several essential elements to constructing a great speech –belief, intelligence, and a minimum of abstraction.

“The language should be concrete, otherwise people don’t listen and they turn off,” he said. “And there should be lots of verbs; all the great speeches are rich in verbs.

Do speeches today achieve that? I don’t think so.

I believe there is a marked lack of inspiring, memorable speeches given these days in large part because of the changing nature of media.

Politicians today are not given to delivering visionary messages of hope and inspiration. Much of what passes for political discourse is carefully crafted, created and delivered to provide a simple grab for the evening news. When the speaker knows that all that will be reported is a short sound-grab from a speech, this does not lend itself to the delivery of any inspiring oration.

Not only that, but much of what has passed for political discourse in Australia in recent times is negative, personal attacks and criticism – a two dogs barking style of politics.

So why are great speeches important?

If you’re interested in learning more about Dr Martin Luther King Jr. there is a biography of him here: http://www.biography.com/people/martin-luther-king-jr-9365086

A recent survey revealed the top 25 most memorable speeches of all time, according to more than 1,000 Australians.

10. Queen Elizabeth I. I have the heart and stomach of a king, 9 August 1588. (Address to the troops at Tilbury as the Spanish Armada approached Britain.)

13. Socrates. Statement at trial condemning him to death, 399BC, Athens.

18. Pericles. Funeral Oration for the fallen of the Peloponnesian War, 431 BC.

25. JK Rowling. Commencement Speech, ‘The Fringe Benefits of Failure, and the Importance of Imagination’, June 5, 2008

To qualify for inclusion in the survey, the speech must have been given in a public arena. The speech could have been on any subject. The speeches may have been heard or read and can come from any time, from the distant past to the present.

The speech may have been made in Parliament or a palace, a town hall, theatre, cemetery, courtroom, battlefield or place of worship, on radio or television, to a small crowd or an audience of millions.

10. John Howard. Election Policy Speech, “We will decide who comes to this country and the circumstances in which they come.” 28 October, 2001