The Story of Smith-Corona 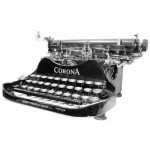 Now that’s bad news for many people, because most people do not like to change. But it’s good news for others though because where there is change there is sure to be opportunity lurking about someplace!

Your focus in business should not be on protecting what you have, but rather on identifying and adapting to the next big thing.

Smith Corona did not miss the emerging trend of personal computing. In 1990 they even observed that the industry was “in a period of transition between typewriters and word processors” and in 1991 formed a partnership with the Acer computer company. The partnership was a good strategy and the CEO even remarked of computers: “They are a logical extension of our line”. In 1992, however, the computer partnership was a distraction to their main focus of relocating their typewriter production to a lower cost base in Mexico, their late entry to the market meant they faced stiff price competition, and the partnership with Acer was ended. A former executive of the company has noted that at the time they could not imagine their company going out of business, that it was “hard to imagine that the typewriter would be annihilated…”