The power of a crowd: Crowd-funding and P2P 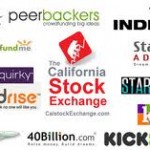 In 1994, Microsoft founder Bill Gates was quoted as saying: “Banking is necessary. Banks are not.”

Banks and other financial firms are intermediaries, standing between lenders and borrowers, savers and spenders. The decision as to whether to lend funds to an aspiring entrepreneur or business owner depended upon a number of variables – the perceived likelihood of success; did the business owner have a track record in business; did they have collateral to risk as security for the loan; or even simply the whim or caprice of the lending manager.

When traditional credit markets dried up in the wake of the Global Financial Crisis amid tighter lending criteria that restricted access to capital, Peer-to-Peer (P2P) lending and crowdfunding was born.

A proliferation of online platforms are now allowing people with money to spend or money to invest to connect with charitable organisations promoting a cause or new entrepreneurs with great ideas but short of the funds to bring the idea to life.

Crowdfunding allows an entrepreneur to pitch their idea to the world in exchange for the promise of a reward – often to be the first to receive the product once it has been manufactured.

Crowdfunding has turned traditional business theory on its head. It used to be that business did not connect with customers until after the product had been manufactured. Crowdfunding allows an entrepreneur to connect with potential customers much earlier than that – even at the conception and creation stage.

As Wil Schroter wrote in Forbes Magazine, “Prior to crowdfunding campaigns, the idea of pre-ordering a product that had never been produced was virtually unheard of.  Big companies with strong reputations could sometimes offer pre-orders of everything from video games to movie tickets, but the idea of a single entrepreneur successfully raising capital for just a prototype was a pipe dream.

The popularity of crowdfunding has encouraged widespread acceptance of requests for capital prior to production. This has led to an explosion of new campaigns allowing entrepreneurs to self-capitalize their ideas.”11

Apart from the ability to raise funds prior to production – what is being called ‘pre-tailing’ as opposed to retailing – this provides the entrepreneur with something very valuable – the ability to gauge market interest in a new product from prospective customers and thus minimise the risks of production, a significant cause of business failure.

In an article about P2P lending in September 2013, the Australian Financial Review reported on the growth of the industry. Quoting research by the Open Data Institute it was reported that if the present pace of growth continues, the United Kingdom P2P market alone will be worth $1bn within two years.12

In Australia growth has been slower but if overseas trends are a reliable predictor of future trends here, then we are poised for massive growth.

The AFR reported that the potential power of P2P lending was recognised by the Australian Centre for Financial Studies in its Funding Australia’s Future report, (July, 2013) which pointed to technological advancement, innovation and regulation as three factors changing the banking industry. The report said: “Arguably we are at a point in history where the interaction of those factors is pointing towards a significantly lessened relative role for financial intermediation.” 13

Matt Symons, co-founder of Australia’s only active P2P lender, SocietyOne, makes the point that P2P lending offers a very different approach to traditional funding. “The model becomes really powerful when it supports a return to community, grass-roots, real-people lending and away from what the banking institution has become.”14

As well as being a powerful force for democratisation, as a tool of disintermediation the internet is providing powerful opportunities to disrupt traditional financial markets and provide new opportunities for entrepreneurs.

And it has caught the attention of Government.

On the 24 February 2014 The Federal Minister for Communications, Malcolm Turnbull posted on Facebook an interview with John Medved, the founder of Crowdfunding platform OurCrowd.
Malcolm Turnbull: 24 Feb 2014: “Crowdfunding has become an increasingly popular way of promoting financing for innovative projects, allowing start-ups and rapidly growing companies to access diversified sources of capital. There are already a range of successful crowdfunding platforms in Australia, such as Pozible. This week another online platform, OurCrowd, announced it would enter the market, offering yet another source of funding. I spoke to its founder, Jon Medved, about the implications for Australian entrepreneurs.”15

Crowdfunding is opening up new ways of investment and new ways of funding for individuals, entrepreneurs and business. Crowdfunding as an investment model is revolutionising the way lending and borrowing happens. It is proving to be a legitimate and stable investment option that is poised to not only stay in the game, but also dominate and topple antiquated industry models.

SocietyOne is Australia’s first fully compliant P2P lending platform. SocietyOne offers investors the opportunity to invest directly into a diversified portfolio of personal loans issued to credit-worthy Australian borrowers. Personal lending is an asset class that has been one of the most profitable parts of the Big 4 Australian retail banks over the last 5 years. SocietyOne is now making this personal lending asset class available to qualifying investors. See http://www.societyone.com.au/

By empowering consumers and lowering transaction costs, online marketplaces have transformed a range of traditional industries including consumer retail, travel and entertainment. SocietyOne is a peer-to-peer lending platform that intends to revolutionise the consumer lending market by offering borrowers a better deal for personal loans and providing commensurate returns for investors.

By removing the costs and redundancies in the traditional banking sector we’re able to effectively connect borrowers and investors, passing on those savings in the form of a better rate across all our online personal loan offers.

The Coolest Cooler / Esky / Chilly BinQuite possibly the best invention ever. Not only does it transport your cold beverages and ice around, it comes complete with a waterproof bluetooth built-in speaker. You can also recharge your devices with the built-in USB charger. But the most amazing thing (well I think it is) is the blender attachment on top of the Coolest Cooler. Oh, and it also has a bottle opener.

On 28 August the Coolest Cooler surpassed the Pebble watch to become the most funded project ever on Crowdfunding platform, Kickstarter. With two days remaining in its campaign, the Coolest Cooler had raised more than $US10 million in funding from more than 50,000 backers. All of this before a single cooler had been made or shipped. A fantastic example of pre-tailing.https://www.kickstarter.com/projects/ryangrepper/coolest-cooler-21st-century-cooler-thats-actually/pledge/new?backing%5Bbacker_reward_id%5D=2829393&clicked_reward=true