The Coolest Esky in the World! 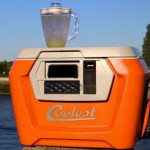 Today the Coolest Cooler surpassed the Pebble watch to become the most funded project ever on Crowdfunding platform, Kickstarter. With two days remaining in its campaign, the Coolest Cooler had raised more than $US10 million in funding from more than 50,000 backers. All of this before a single cooler has been made or shipped for a customer. A fantastic example of pre-tailing.

The Coolest Cooler / Esky / Chilly Bin
Quite possibly the best invention ever. Not only does it transport your cold beverages and ice around, it comes complete with a waterproof bluetooth built-in speaker. You can also recharge your devices with the built-in USB charger. But the most amazing thing (well I think it is) is the blender attachment on top of the Coolest Cooler. Oh, and it also has a bottle opener.

Crowdfunding allows an entrepreneur to pitch their idea to the world in exchange for the promise of a reward at a future time – often to be the first to receive the product once it has been manufactured.Crowdfunding has turned traditional business theory on its head. It used to be that business did not connect with customers until after the product had been manufactured.

Crowdfunding allows an entrepreneur to connect with potential customers much earlier than that – even at the conception and creation stage.

As Wil Schroter wrote in Forbes Magazine, “Prior to crowdfunding campaigns, the idea of pre-ordering a product that had never been produced was virtually unheard of. Big companies with strong reputations could sometimes offer pre-orders of everything from video games to movie tickets, but the idea of a single entrepreneur successfully raising capital for just a prototype was a pipe dream.

The popularity of crowdfunding has encouraged widespread acceptance of requests for capital prior to production. This has led to an explosion of new campaigns allowing entrepreneurs to self-capitalize their ideas.”

Apart from the ability to raise funds prior to production – what is being called ‘pre-tailing’ as opposed to retailing – this provides the entrepreneur with something very valuable – the ability to gauge market interest in a new product from prospective customers and thus minimise the risks of production, a significant cause of business failure.

As well as being a powerful force for democratisation, as a tool of disintermediation the internet is providing powerful opportunities to disrupt traditional financial markets and provide new opportunities for entrepreneurs.

Crowdfunding is opening up new ways of investment and new ways of funding for individuals, entrepreneurs and business. Crowdfunding as an investment model is revolutionising the way lending and borrowing happens. It is proving to be a legitimate and stable investment option that is poised to not only stay in the game, but also dominate and topple antiquated industry models.