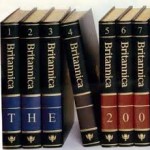 Writer Tim Carmody told the fabled story of Encyclopaedia Britannica well in a 2012 issue of Wired Magazine, under the headline ‘Wikipedia Didn’t Kill Britannica. Windows Did’.2

Britannica was sold off in 1996 for $135 million “…long before Wikipedia was a crowdsourced gleam in Jimmy Wales’ open-access eye. In 1990, the company had $650 million in revenue.

What happened in the six years in-between was Encarta.

As Carmody writes, “An important part of Britannica’s story that is easy to forget now is that Microsoft pitched Britannica on developing a version of Britannica for PC’s in the 1980s, with their first version of Windows.

After Britannica turned them down, Microsoft partnered with Funk & Wagnall’s, rebranding it Encarta and focusing on a lean, computer-specific program that could help sell personal computers beyond productivity applications like Word and Excel.”

Apart from being a source of information, Encyclopaedia Britannica was marketed to many middle-class parents as a household totem. Historian Yoni Appelbaum wrote that from the beginning, Britannica’s cultural project was as much about the appearance of knowledge as knowledge itself. Britannica “sold $250 worth of books for $1,500 to middle class parents buying an edge for their kids.”

So their primary reason for existence as a set of printed volumes was easily replaced by the personal computer, first armed with Encarta, then Wikipedia, Google and now “the robust information economy of the entire web.”

The point is this: had EB recognised the likely deleterious changes that were coming, they could have repositioned themselves accordingly.